Now we take a break from writing rules and self-indulgent physical musings for my campaign, and turn instead to self-indulgent setting geography. What exactly is happening on the surface of this ring?

The first thing everyone notices is that almost all of the ring is covered in hell-blasted magic-nuclear wasteland, meaning that of its ludicrous surface area of 36 billion square kilometers, somewhere between 100 to 200 million square kilometers is actually what would traditionally considered habitable, though pockets of society and life exist in the Empty Ring.

The habitable ring consists of four continents packed around a massive tower that stretches from the ring’s surface all the way to the center. It is massive and visible anywhere on the ring. Generally it is called the Tower of Heaven in whatever language. Two continents on the same landmass (called as a whole Julbil, Yubi, or Yelas) as the tower are divided by plateaus, mountains, and steppes, and reach up to one edge of the ring, the tower’s base being their “southern” boundary, while another continent is antezephyr and “south” of that landmass (called Akerhta). A third landmass stands zephyr to Julbil, across another ocean. To the antezephyr of the continents is an ocean that insulates them from the worse of the hell-blasted bullshit in the Empty Ring. Xul, Ulos, or Xiule (the Zephyr-most continent) is connected to the Empty Ring by land and presumably have things much worse. 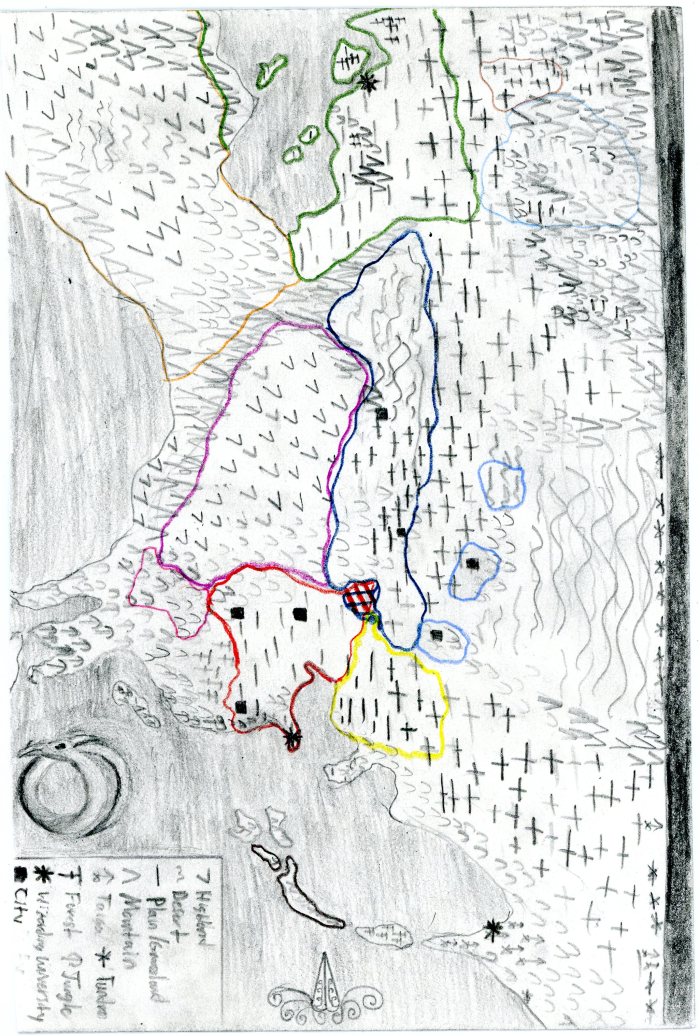 The weird elongated plus signs are steppes. The arrow points zephyr, and the big black area are the impassable border mountains of the ring. From side to side is ~1700 km

The campaign is taking place on the antezephyrine part of the tower landmass, which is called Fengdi, Eurus, or Sulminui, near the border of the sister continent. Its zephyrine counterpart is Zephyria, or Xidao, or Suladui. The attached map shows almost all of Fengdi, and probably a third of Zephyria. The campaign takes place in and around the city of Mendicant, here seen in the center of the light blue outline above the dark blue outline. To its zephyr in the same color is the various salt-towns, and to its antezephyr is the town of Kindness. All of them are located more or less along the largest trade vein passing from one continent to the other. All of them are also tributaries of the Zhylr Empire (dark blue), and all of them more or less occupy territory that once belonged to nomadic horse tribes. Mendicant recently entered into a war with a group of nomads led by one Oran Khan (I kept rolling nomads for random encounters) and reeling from a chevauchee to their northern periphery.

For the rest of this section, I’m going to refer as the direction towards the closest edge as “egdewise” and the opposite as “endwise”, since in this case it’s clear what I mean and also captures the infuriating lack of clarity that sometimes develops when languages try to try direction.

Endwise of those is the massive Zhylr Empire, the rising star of Fengdi’s political arena. About 50 years ago, the eponymous Zhylrs sold themselves out as mercenaries for the Bright Empire of Fengdi (Mingfengdi, outlined in red) against the various nomadic tribes that were encroaching on their territory. They were so successful (owing to their shock cavalry tactics mixed with destructive magicks) that when they returned to their native deserts and steppes they were able to unite the people there under their rule. Nowadays, they maintain a moiety with the Zhylrs on top, and the people of the Dzo forming the rest. Zhylrs themselves are elusive in the extreme, and only seen in public veiled and clothed. The steppe nomads (Kuluks) claim they aren’t human.

Mingfengdi has fallen far from its former glory. The overthrow of the previous Cong dynasty removed the dread influence of the Eunuch Mages (the wizarding university far edgewise to the empire, long story how it got there), but the Zeng successors were unable to maintain central authority, and the empire now exists as a series of competing feudal states. To their edgewise in the yellow is a Kuluk state carved out of former imperial territory. In fact, even more of the edgewise territories once fell under the empire’s sway, but has since been turned back over to small tribes of steppe nomads, too small to map.  The same could be said for the end-wise areas, with the breakaway state in pink having rebelled and won full independence. Now the Zhylr Empire also encroaches on their territory, in the cross-hatched area. The towns of Mendicant and Kindness are mostly Gen, the primary ethnicity of the Bright Empire, since the invasions of the Kuluk displaced many, and now the Zhylr invasion combined with a period of civil wars has caused yet another refugee crisis to sweep over the trading towns.

The current emperor (or more appropriately, his marshals and ministers) have stabilized the hemorrhaging of territory and prosperity, and most of the civil wars have come to an end. The conservative Zhylrs have also withdrawn after extracting territorial concessions, not wanting to risk their shock cavalry/upper classes against an organized opponent. Also within the empire is the University of Huaidi, where wizards from this part of the world go to be trained.

The huge plateau outlined in purple is the Plateau of Bod, and is occupied by the Bodian Empire, which similarly has stumbled upon troubles and currently has been facing 15 years of semi-continuous succession crises. Tribalism also runs amok, and the empire barely functions at all.

The islands to the ante-zephyr of all of this had a huge war nearly a century ago between the worshippers of fire giants, and the adherents of an abrahamic religion (different parts of Japan). The fire giants won, and their territory is outlined in brown.

Finally, we have Zephyria. The mountains in light blue are the Sky Elves (really just half-elves that figured out how to survive in mountains), and adjacent to them in brown is another group of forest elves that ride specially bred horses and can match the nomads.

The green is the Leagues and Tribes of Barinthia (based on Bactria) with smaller divisions to fine to show. Mostly they have tribes to their edge and more city-states/towns towards the coasts. They fight the Laytinid Empire (Persia) to their end, and also have the University of Pol Ankura, where wizards are trained.

That’s everything labelled. The areas not included tend to have nomadic tribes or tribal kingdoms too small to bother with, and I also want to keep parts of the map open for other stuff.

A Collection of Unmitigated Pedantry

A look at history and popular culture

Self Portrait as a Giant

Fists of Cinder and Stone

In the Shadows of Bones